They build nests in our minds as they lose their natural environments to survive in this human infested big bad world. Some of us are still in love with birds and their soaring existence up there. Hyderabad based artist Sweta Chandra is not only a fine artist but also a fine bird watcher. From the mundane existence she elevates them to contemporary mythical characters, but obviously with a streak of critical pathos, observes Sushma Sabnis… 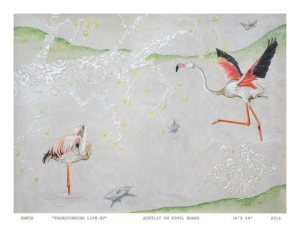 Hyderabad based artist Sweta Chandra, in all her sensitivity and sensibility presented a collection of her works at the Jehangir Art gallery, Mumbai some time ago, relating to this very intense subject of a dying environment. With an exclusive focus on the avian protagonists, the artist, a Santiniketan MFA graduate in Painting, expressed her affiliation and concern towards birds surviving in any environment, especially an urban scenario.

When one goes to a new place, the five senses are alerted primarily with bird sounds or a visual and later by the other sensory signals. A drop or rise in temperature maybe, a distinct aroma or smell, triggering a lost memory on a few taste buds. These indecipherable bird/ animal sounds could be warning signals of predators, playful games with siblings, mating rituals and serenading sounds by prospective suitors. Birds and animals often signal the advent of the coming times. However it is disheartening to see their populations diminish in a constant battle for space and survival. Human encroachment in the name of progress and urbanization into their specific ecosystems has caused so much damage that a few species have gone extinct or migrated for ever into zone less conducive to their welfare. Like human beings in ill-kept refugee camps these birds and animals exist in the broken buildings, around sewage canals or any such shelter they could find to survive.

Sweta works in the acrylic medium and her choice of substrate is vinyl boards. One cannot ignore the textural quality and emphasis of the chosen substrate. Vinyl boards are plastic coated boards, which are not biodegradable, while acrylics are plastic emulsion paints. When the viewer is confronted with this fact, one would question the contradiction in the choice of art materials by the artist. Why does the artist depict a degradation of an environment by using a substrate and medium which contributes to it? 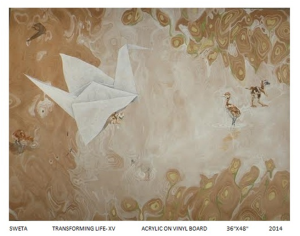 The answer could be in the distinctly metaphoric works of the artist. While at first glance they appear to be watercolours on textured paper, the ridges of the faux-wood background give the protagonists (birds in this case) a certain amount of luminescence. Here the artist makes a choice to use that very material possibly to highlight an irony of mankind itself. Progress conflicts with Nature, no matter how high human ambition wishes to fly, it ‘kicks’ the earth to lift off. The stark depictions hold the argument of the choice of medium by the artist.

Sweta chooses a palette which is controlled, as in the bird feathers in all their natural coloured glory would only appear as they would in reality. There is no attempt at dramatic flamboyance to bring out a coerced contrast. The birds almost blend with the background, hinting at their forced adaptability, albeit with great difficulty. Origami birds, swans and cranes are used as contrasting elements within the pictorial surface to depict the transient quality of life itself and their fragility and grace. Interweaving stories related to birds into the works,(for example, the thirsty crow story) Sweta knits these sensitive memory strings into a tapestry of bygone era of harmony with nature in stark comparison to today’s neglect.

While the works are realistic in their style of rendition, a hidden narrative looms large over each work. The viewer is silently burdened by the weight of this impending issue as they move from one work to the next. Sweta’s works converse with the viewer giving them a glimpse of a possible future,

A viewer who is so engrossed by the beauty and plight of the avian beings while looking at the works of Sweta could go into a poetic reverie where they could conjure up imageries from the world visual and literary scenario in which the winged creatures make invisible bridges between heaven and earth. At the works of Sweta I was taken into a similar mood and I came up with the following thoughts:

“ …imagine a dull smoggy sky.. a sky without birds..then imagine no coloured feathers for a child’s feather collection.. imagine waking up to silence, no bird song… imagine the loss of a moment of sheer awe when a child looks at an eagle fly low…

..if your are a writer, imagine no Icarus, no Jatayu, no Nala Damayanti, no Ugly Duckling, no Jonathan Livingston Seagull, no Thirsty crow story narrated by grandmothers.. no Tweety.. no Birds by Alfred Hitchcock..

..if you are a scientist, no Wright brothers’ airplanes..

.. if you are an artist, imagine no canary yellow, no peacock blue or green, no swan white or dove white, no crow black..

..Now extrapolate this void to the entire animal kingdom that has been an inspiration or a support for human survival. Imagine the earth inhabited only by the human race, and we would be looking at a bleak short lived future of our race..”

However, all is not lost in spite of a trickling sense of guilt, one is suddenly lead into a hallelujah moment with a hopefulness of recovery, by the artist. Adaptability is addressed in some of the works as the prime need of the day, along with a control over humankind’s sky rocketing greed.

Sweta Chandra builds her dual and subliminal narratives very deftly through the choice of medium, the realistic imagery and subtle compositions, interspersed with elements which lead an impending gloomy stream of thought into lighter positive realms of possibility, in turn breathing fresh air and new perspectives into the droning hurdles of environmental issues.