Painted sculptures sit on the fence between sculptures and paintings as a marker of depleting aesthetical ethics of the artists, JohnyML points out.. for Art Tehelka, from India Art Fair 2016..

Image, form, color and signature; this is a very intoxicating cocktail for the art collectors who are also souvenir hunters. They are seen aplenty in any kind of fairs. In India Art Fair 2016 too, I believe this type of art collectors are expected, appreciated and even solicited. You may wonder what I am talking about. I am talking about the overt presence of the painted sculptures in the India Art Fair. These sculptures, unlike the installations and the sculptural installations done by installation artists as well as serious sculptors, stand in between, in a cusp space alluring the clients with the features of paintings and sculptures. Approached from one side, they look like deflated paintings and from another side they look like shrunken sculptures.

This kind of artistic atrocity was perhaps always there; but their indomitable presence started happening by the fag end of the boom years. Precisely speaking these things started by 2008, when painters were made into forced sculptors. I am not of the opinion that the painters should not make sculptures. There are interesting and talented artists who make good paintings as well as good sculptures. T.V.Santhosh officially studied sculpture and ended up as a painter during the boom years. It took several years for him to do some sculptural installations. George Martin also studied sculpture but got his India Habitat-Art India award for paintings. He too took some time to tell the world that he was a genuine sculptor. Chintan Upadhyay trained in painting is also known for his sculptural installations. Take any name during the boom time, Manjunath Kamath, Jitish Kallat, G.R.Iranna, Gigi Scaria and so on, they all oscillated between different mediums and proved that they were talented artists by all means and mediums. 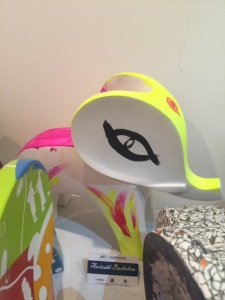 The liberalism that post-modern period provided and the contemporary argument for the avoidance of historicity in a way helped the market or we could say that the idea was a production of the market itself for the purpose of profit. And it was not necessary for an artist to stick to one medium. An actor could sing, dance, fight, write, paint and do what not. A model could become an actor, a body builder, a socialite and social activist. Then why not the artists? They could also become anything. This view has always been there. But in those times (early twentieth century with Abanindranath Tagore, Rabindranath Tagore, Ram Kinkar Baij, Somnath Hore and so on as example… then to Bhupen Khakar, Atul Dodiya, Vivan Sundaram et al) it was not purely a commercial activity. It was a sort of flourish and there was some kind of playfulness and irreverence. Look at the works of Bhupen Khakar presented by the Sarjan Gallery in the India Art Fair.

Selling painter-made sculptures or sculptor-made paintings towards the fag end of the boom time became a sort of last ditch attempt for many galleries to make money. Shalini Sawheny, Tunty Chauhan, Sunaina Anand and many gallerists like that helped artists to make multiple edition sculptures so that they could sell. Perhaps, this time, the market seems to have tilted towards three dimensional art works. Look at India Art Fair; one could see the predominance of sculpture (see my article in Art Tehelka https://artehelka.wordpress.com/2016/01/28/india-art-fair-2016-opens-in-delhi/). We could see the fantastic sculptures of K.S.Radhakrishnan, Subodh Gupta, Ravinder Reddy, Krishna Reddy and so on. Painters like Paresh Maity and Seema Kohli also have tried their hand at sculptures.

However painted sculptures in multiple editions is an interesting addition to the India Art Fair this year. One would wonder whether these works should go into the souvenir store or in a booth. Art Alive gallery has a special booth (ironically located next to the booth that plays out the partition narratives) with several small elephant sculptures all painted over by painters and other artists including the Bollywood kings like Shah Rukh Khan, Salman Khan and Aamir Khan. Three Khans have blatantly proved that they are the poorest and below average talents when it comes to painting. They are wonderful actors and wonderful speakers. I have always envied the way Shah Rukh Khan speaks on a stage. Salman Khan is a bore and Aamir by virtue of many saying that he is an intelligent person’s actor, he tries his best to look intelligent. But three of them are horrible painters.

The Khan trio’s elephant paintings with those done by the veteran cultural icon Amitabh Bacchan and other artists who are shadowed by the presence of these four people are supposed to fetch money for saving elephants in some elephant sanctuary (sorry for being vague. I did not have the patience to see this depth of charity!). I have seen pathetic sculptures of tigers being painted by artists. I have seen ugly sculptures of bears painted by artists (I love the original animals as they evoke the tenderest of feelings in their burning bright beastly beauty). And I do not discern this act from these people painting cricket bats, balls of different kinds, any given surface provided some money is shown. I request all the artists immediately to stop this charity painting. They are good so long as they are in the souvenir shops of these galleries. They should not be presented as works of art. Yes, they are works of art if they are given that status in the oeuvre of an artist.

We have such artists who have given a lot of respect to their toy works and I would say most of the Santiniketan artists who participate in Nandan Mela  and the Baroda artists who participate in the annual festival initiated by the doyens like K.G.Subramanyan. In the hands of a master artist any object turns into a work of art. In the hands of a musician any object becomes a musical instrument. In the hands of a lover the body and soul of the beloved become mountain and sea, fire and air, wind and lightning. They burst into the valleys like the rain of nectar. Hey artist friends, what are you doing here? Why you are so hard pressed to create art like this? Stop painting objects for charity because your charity should begin at home. Not with elephants. There are people who would take care of elephants. What Art Alive gallery is going to do with the elephants in India? There are hundreds of poor students in the universities who struggle to make ends meet. Support them to study art, paint their lives colorful and let them be the living mementos of your greatness and undeclared charity. This is a clarion call by a person who has given his life to art and can move mountains with his words..