In his solo, ‘In-coming Passengers’ artist Desmond Lazaro connects the dots on a map of migrations that his family underwent over generations and tries to get a perspective on the crisis of migration plaguing the world today… observes Sushma Sabnis

In the award winning French film Amelie, the charming protagonist quite accidentally finds a rusty little tin box hidden away behind one of the tiles in her bathroom. With a sense of elation at having discovered something akin to Tutankhamen’s tomb, Amelie opens the tin box to find somebody’s childhood securely locked away from the gnawing claws of time. With a clear agenda to return the recovered childhood to its rightful owner, she sets out to find the fifty year old man who eventually lays claim to that rusty little box of childhood keepsakes. His life changes as he sets out to mend relationships with his children and make up for lost time.

Such similar chance rendezvous with one’s forgotten memory walking down a street one fine morning, is probably what inspired artist Desmond Lazaro to create his intense dialogue with his own past. The beauty of it is that Desmond Lazaro has encountered a tin box of memories eagerly waiting for him in many countries. And the artist has just set out on this journey.

Migrations are no more an intermittent or rare phenomena. It is not just the birds that migrate over the year to breed, but mass migration has been known to happen since pre-historic era when hunter-gatherers moved to occupy different places in search of better food and habitable conditions. One would like to believe it is ‘in the blood’ to move towards better prospects or at least in the hope of better prospects.  Either way, migrations happen when one is hopeful of a better life or trying to leave behind a not-so-happy one.

In his solo ‘In-coming Passengers’, at Chemould Prescott, Mumbai, Lazaro tries to find the routes his family has treaded upon through the generations and brings forth a distinct addressal of the very concept of displacement, migration and identity as seen in today’s times. 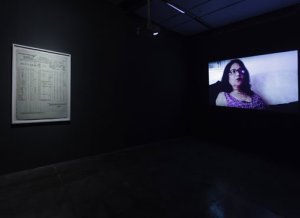 Lazaro tries to connect the dots of how his family’s movements over time, and continents could be seen as a much larger narrative of social, political and economical situations trickling down every generation. As the political situation and the refugee crisis looms large over the world even today, one is led to believe that there have been numerous instances of migration beginning with the Partition of India and not all of them are with chosen by the migrants willingly. As in the case of Lazaro, who interviews his mother about the time she left Rangoon, Burma with her family in 1957 and landed on the shores of Liverpool, England by the SS Salween passenger ship. The entire family chose to migrate rather than stay in hostile conditions in Burma which was forcing the Anglo’ families to leave. The journey on the ship and the metaphorical ‘throwing aboard’ of notions of stability and permanent settlement seep through the interview which forms the centre piece of the show.

When Joyce Theresa D’Cruz (Lazaro’s mother) speaks simply to the camera, about the conditions of her family reaching the UK on a severely cold morning leaving behind a warmth and comfort of a country in turmoil, one is drawn to the quiet acceptance tinged with a sense of loss in her voice. There is immense dignity in the eyes, yet it comes with hues of pain. The question of deeply belonging to some place trails off as the viewer is left grappling with the unpredictability of the unknown as the 15 year old Theresa must have felt then.

Another work that stuns the viewer instantly upon entering the gallery is the large finger print made from gesso and gold leaf. Having trained and  practicing the narrative art of Picchvai and miniature painting, Lazaro employs the traditional techniques in his contemporary works. The combinations work well and the effects are distinct, like in the finger print work. There is only one word which comes to the mind, ‘Identity’ when one sees this work and the whole show falls into place. Be it on a philosophical, spiritual or a personal plane, the crisis of identity has plagued our world today. One is left wondering if one is what one’s passport or voter’s id defines them as. It is in this context that this work transcends all planes of engagement. From a very intimate monologue, this work could address the entire world and an entire species itself. The eternal question, ’What is my biological, personal, social, public, regional, national, spiritual identity?’ is asked through this work.

Taking this line of thought further the artist delves into actually procuring the physical records of his parents, grandparents and other relatives, in the form of passenger lists on board the S S Salween, baptism certificates ,marriage certificates etc. He recreates these lists as large scale art works, with his gold leaf and blurred family portraitures in some, along with pledges taken to raise children in the Catholic faith, snapshot paintings of the family survival etc. 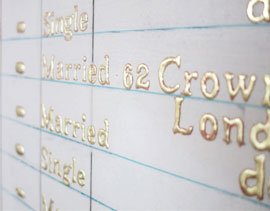 The gold leaf in some of his works reminds one of the Kintsugi traditions of Japanese culture. A broken bowl or object is repaired using gold leaf and organic glue to rebuild the object with grace and there is no attempt to hide the scars, but it is celebrated with the gold, and seen as triumph of the spirit of endurance. Lazaro’s works seem to rebuild his family’s fragmented past, delicately using gold leaf mixed with the glue of memory. The other thing about Lazaro’s work is the conscious documentation of things in the most aesthetical way possible. One could believe that it comes from the essence of being a practicing miniaturist, where the tradition induces a sense of questioning, observation, documentation, beauty and aesthetics in the practitioner.

Another interesting work is the one which contrasts the wooden skeleton of a house, placed atop a detached concrete block / pedestal. In the video interview, the artist’s mother recollects the cold, detached welcome of the shores of the UK, as contrasted with the farewell warmth of Burma which the family left behind. This work addresses the loss of the familiar and the absolute coldness of the unknown and unpredictable. The cold probably is felt deeper in the mind and heart than on the skin in such cases. This cold could also be the  reflection of an absolute erasure of identity of a family unit, which has been brutally ousted from their known territory and general history feigns amnesia at some point. This work resonates with every single family that has had to migrate, relocate, leave, flee or go underground for various reasons. This work could also be a metaphor for individuals who simply feel out of place even in familiar surroundings.

When the alignment of the mental home and the physical home is lost, a person literally embodies a refugee status imprinted on the mind and that is what plagues the world today as the artist reflects through his personal and global critique on migration in his works.