EDITORIAL :  The Sudden Birth of Galleries in Fort Kochi: Who is Midwifing Them? / Johny ML

Years back, when I visited Paris, I was taken to a gallery by one of my friends and to my surprise I found that it was a ‘gallery street’. Most of the important private galleries (but small in scale) were located in the same area (unfortunately I have forgotten the name of the area and I am too lazy to google it) and each gallery catered to a particular style of art. This reminded me at once of a sort of unity in diversity, a philosophy that our country has always held high and has been put to test by the right wing forces for quite some time now. They co-existed, flaunting their kind of art without disparaging the other forms of art displayed in other galleries. This gallery street was a convenient idea for the art lovers and collectors (if not tinged with a bit of slumming by sacrificing exclusivity and aloofness) where the plebeian mingled with the aristocrat, almost underlining their founding philosophy, Liberty, Fraternity and Equality. To put it in other words it is good to have galleries in one place. Both Delhi and Mumbai experimented with the same idea during the boom years creating art hubs, art districts, deciding common opening days and so on. In the case of Delhi, the district has reduced to the level of a mohalla and in the case of Mumbai the erstwhile healthy bulk of the galleries as been gone into a sort of austere dieting. 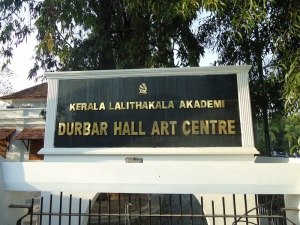 Defying all the myths of economic slump in the art market, suddenly in an unexpected quarter of the country I see (along with many of my compatriots, what a word!) the opening of a few galleries; in Kochi. You may question me about that word, ‘unexpected quarter’. Kochi has been in the world art map ever since the establishment of the Kochi-Muziris Biennale in 2012. During the last five years with three ‘successful’ editions to its credit, the KMB could also now claim to have attracted galleries to the island city of Fort Kochi, Mattancherry. As I mentioned elsewhere, it is always good to have more galleries in the same area so that people could choose a day for art in a week or in a month and catch up with most of the shows in the town. So let me tell you that Mattancherry is the new art district in Kerala. The adjective ‘new’ is only a qualifier as there were no art districts in Kerala before. Yes, in Kerala you find art hubs, not created by any galleries or even by the Lalit Kala Akademy but by the presence of the artists who do or do not do art but are concerned about it. They live the life of the artists; at times decadent and at other times disciplined and to the point. So in Trivandrum, in Alappuzha, in Eranakulam, in Trissur, in Kozhikode, in Kannur and so on there are art hubs. These hubs are simply the places where artists gather and share ideas. With amoeba like nature they constantly change their shapes and locations within but not ever compromising with their artistic views.

Mattancherry and its new status as an art hub tell us a different story. For the first time in the art history of Kerala, there are at least five galleries operating from the same locality with KMB as the gravitational point. While KMB plays a bigger role in deciding the dynamics of the art activities to be happening there, these galleries namely, Open Eyed Dreams, Indriyam Gallery, the former Chaitanya Art Gallery with a new name (Gallery 27), Dravidia Gallery, Kashi Art Gallery, David Hall and the BC Gallery. I do not know whether there are more. Dravidia and Kashi were the pioneers in this area in which Dravida catered to romantic and nostalgic artistic imaginations with its evening musical soirees, Kashi was more an international hub with a thrust to eco-spiritual aspects of art. When art boom came Dravidia succumbed to its own anachronism and Kashi flourished as it could redefine its philosophy and commercial positioning. Rest is history. OED Gallery moved from the mainland to Fort Kochi after the establishment of the KMB. Chaithanya Gallery (Gallery 27) too relocated itself to the Fort Kochi area with a new name. David Hall came up. During the last three months artists in Kerala saw the establishment of two galleries, namely Indriyam Gallery and the BC Gallery with Dravidia staging a comeback.

What makes the story more interesting and curious is the opening of Uru (small scale wooden ships) in Mattancherry under the directorship of Riyas Komu, one of the founder directors of the Kochi Muziris Biennale. Now he doubles up as an artist and director-curator of the space, which completes the story of Mattacherry art scene for the time being. It is always natural that when a huge institution comes up anywhere in the world, there would subsidiaries and supplementary organisations coming up around it not only to provide service to the major establishment but also to function as a logical outcome of the prime establishment. Major corporate houses function in the market in this way. They directly or indirectly establish subsidiary companies and using these as front organisation, they buy out start ups and profit making smaller organisations which have the established networks of communication and clientele. I do not intend to say that what happens in Kochi is something of this sort but I have my own doubts because with Uru coming up, KMB becomes a legitimized non-commercial establishment and Uru its front organisation in the commercial field. This need not necessarily be so. Uru could be an extension of an artistic idea but that idea needs its own justification therefore the sudden appearance of a few galleries in Mattanchery should be seen in this context.

It is interesting to notice that suddenly in down south, in Trivandrum too the Triva Contemporary Gallery which has been lying dormant for some time has started its activities. All this sudden spate of gallery activities makes an interesting scenario in Kerala. There could two reasons why the galleries are gravitating towards Fort Kochi; one, as KMB is there, the possible footfall would be more if galleries are relocated there. Two, as it has become an art hub by default, there could be the presence of more art buyers and collectors. Whatever be the case, I would say that all these galleries, unlike the galleries in a Paris street, do not cater to a variety of tastes. Rather most of them are gunning for the same kind of aesthetics which would satisfy a cosmopolitan buyer. There is nothing wrong in it either. But so far I have seen only two galleries putting a different approach; they are namely the Indriyam Gallery and the BC Gallery. The other galleries mentioned above are actually trying to grow under the reflected aesthetics of established by the KMB. With the presence of Uru, the game is going to be further different as its curatorial interventions would become the benchmark for the other galleries to emulate.

Why the suddenness of these galleries? Who are funding them? Who is the force behind these moving of galleries to Fort Kochi? What helps Triva Contemporary stage a coming back? I may be absolutely wrong in making the following questions: one, except for a couple of galleries the rest must be funded or partially funded or strategically helped by the same source. Only thing is that who or what is the same source? There is an interest of somebody to move the art activities to Fort Kochi completely. And could it be the result of the futuristic thinking that the Durbar Hall, one of the venues of the KMB may be reclaimed by the artists through the help of the Lalitha Kala Akademy? Is it a ploy to divide the opinion of the artists who do not totally agree with either Akademy or the KMB? Is it a way to create more spaces for the artists in Fort Kochi so that the mainland would be abandoned and an exclusivity would produced around the location and aesthetics within Fort Kochi? Who is the manipulator behind these moves? Is it a part of legitimizing certain art activities? I may be absolutely wrong even in raising these questions. If I am wrong I am ready to accept them as my whims. But if they do have an answer, I think that is all about legitimizing certain activities of the dominant players in the art scene in Kochi and get a cover for it through a number of new galleries.

Editor in Chief of Art Tehelka