EDITORIAL:  Gandhiji as a Conceptual Artist and the Residency Circuit Artists in India / Johny ML

Today is Gandhi Jayanti, the birthday of Mahatma Gandhi. Had he been alive, he would have been 148 years old now. Gandhiji, when he was nose deep immersed in the Independence struggle in India, had wished to live more than hundred years so that he could complete the missions he had undertaken. But by the time Indo-Pak division was a reality by 1946, Gandhiji told his disciples that he no longer wished to live long for he knew that things wouldn’t change. The India that he had seen in 1915 was completely different after three decades. With shock and shudder he realized that though his presence had created several roadblocks for the avarice of Indian politicians as well as people, he could not eradicate the human sins from the land completely. He knew however he tried he would never be able to do so. When he received the bullets in his chest on 30th January 1948, it was not the demise of the Father of our Nation but also the departing of one of the most influential conceptual artists on the past century.

Hardly scholars have assessed Gandhiji in the light of his conceptual formulations and socio-political acts that had taken the forms of great happening and process art. Gandhiji has been the darling of cartoonists and artists of all nations for his simple human form allows them to go any length to concretise as well as abstract it. He is an artist’s delight. Each year during the day birth and death anniversaries of Gandhiji, artists all over India try their hands at simplifying this simple man’s form further in flowing lines. In a way, Gandhiji is like Lord Ganesha for the artists. With irresistible body form, both Gandhiji and Ganesh ji enthral and inspire artist to capture their forms in most simplistic or abstract terms. To put it in other words, Gandhi ji is not only a personality and philosophy but also he is a genre of art. But we fail to understand the artistic nature of Gandhiji. In a sense he was Duchampian; Duchamp brought his ‘Fountain’ in 1917 and it was in the same year Gandhiji got involved in the real politics of Indian land by involving in the struggle of the Indigo workers in Champaran. He never had to look back.

It is said that Gandhiji was averse to movies and the only film that he had seen was Phalke’s Raja Harischandra. In fact as a busy social thinker and worker, a political theorist and activist, a visionary and romantic economist, and above all as a dreamer and lover of human kind and individuals alike, Gandhiji did not have three full hours in his hand to sit and watch a movie. Had such time been at his disposal, I am sure Gandhiji would have watched many a movie at that time for the movies that came out of the studios in Kolkata (for Hindi film industry was mainly operating from Kolkata in those days) and Bombay mostly discussed the reformation themes and narrated Indian reality disguised in stories from epics. As a lover of Ram and Gita, Gandhiji would have loved to spend time in watching movies. But he did not for time constraints. But we have all the reason to believe that Gandhiji was a lover of paintings and sculptures though he had hardly donned the garb of an aesthetician and recorded his views on art in any of his journals. His visits to Santiniketan and the highly reverential relationship with Tagore, his familiarity with the works of Nandlala Bose (his Haripura Congress posters were commissioned by the party) and the stalwarts of Santiniketan who had been involved in the debate of a ‘national art’, his educational experiments in Nayee Talim more or less in the same lines of Tagore, his involvement with artists like Devi Prasad in developing the curriculum using art as the basis of education, Gandhiji was pretty much aware of the art scene in India in his days. He did not have time to be an art connoisseur due to his pressing schedule elsewhere.

What Gandhiji however did not understand was his role as an artist himself. According to my view, Gandhiji was the biggest conceptual artist that India has produced. Going by today’s parlance he was not only a conceptual artist, he was a process artist, a happening artist, an artist who did participatory projects, a video/film artist, an artist who worked more with texts than visuals, a site specific artist and above all a political artist. Let me explain how; Gandhiji had lived almost three decades abroad, mainly in South Africa, before he embarked on his political journey in India. The years that he had spent in London and South Africa were the times when he experimented mostly with his life; those where the days when he divested himself of property, abstained from sex, experimented with food, social work, toilet cleaning and community living. This was the same time he developed nature health and fasting for cleansing mind and body. Each experiment was later developed into a rounded political action back in India.

Gandhiji’s speciality as an artist involves his sense of reality; in thinking definitely he was romantic and a realist but in finding the mediums and execution he was just like any other conceptual artist. His romanticism goaded him towards a larger goal than the limited aspirations such as name and fame. His realism prodded him to always look around him for inspiration while testing the feasibility of it with the so called international models and his conceptualism worked effectively as he gave symbolic value to anything and everything that he did. Those conceptual transformations and the resultant symbolisms were difficult to understand in the beginning even for the British intellectuals let alone the Indian political leadership. But there was an another nebulous entity which remained divested of all kinds of power for centuries, which Gandhiji found as his viewers; this entity was comprised of the people (the Daridra Narayana-the poor gods- God as poor people) of India and he found them the effective collaborators for his artistic works. If we go by the conventional sculptural terms, I would say, in them Gandhiji found the clay and with his dexterous hands he moulded them into exquisite sculptures that stood completely animated full with life and a sense of freedom.

The arrival of Gandhiji in the Indian shores was not a head on encounter with the current political scenario. On the contrary heeding to the words of his political mentor for years, Gopala Krishna Gokhale, Gandhiji travelled the length and breadth of India and tried to understand the people of the country, how they lived, thought, observed, approached politics, economics and life so on. This was his research trip that told him that for an effective communication with these people, he needed to spoke in their language, not just the verbal one but the language of life. Gandhiji donning the garbs of India’s poorest of poor was his first conceptual act, perhaps, much more enduring and influential than what Picasso and Duchamp had done together. With his calls for discarding of foreign mill clothes and the adoption of Charkha and Khadi as the symbols of autonomous village economy and the non-cooperation were the biggest political and artistic act through which he could change a whole country wear Khadi for many years and still many remains in the same lines. Gandhiji was touching the basics of Indian life; the need for Kapda/Clothes, out of the roti, kapda aur makan trio.

Gandhiji believed Makan/home as the country itself. And his asking for the freedom of the country was asking for the makan itself. In his performative acts of fasting (not feasting as the contemporary artists and politicians do), he made the whole country to fast along with him. Can you imagine an artist, fasting in a jail in Yervada, Pune, and the people in South India skipping their meal not because they wanted freedom but because a man was going without food for brining freedom to all those people ate heartily. It was the art of conscience and a very effective performance art. His masterpiece came in 1930; from Sabarmati Ashram in Ahmedabad he walked to Dandi seashore and broke the draconian salt law that was imposed on Indian salt. Gandhiji was touching the ‘roti’ side of the above trio. Everyone wanted a pinch of salt with their dry rotis/breads. Gandhiji symbolised salt and the whole of India walked with him. Which performance artist could have achieved such a feat today or ever? Today, yes there are organized moves to bring thousands of people in the city squares, make formations, nude or clothed, but how could art move people voluntarily. Gandhiji’s conceptualism worked more effectively than any artist of the 20th century and Gandhiji’s performances could move the mountains. 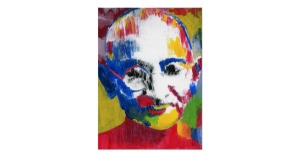 If any one feels or says that Gandhiji was doing it out of his inner call, by simply being an agent of his ‘Ram’, I would say, no, Gandhiji was not doing it as he had received his calling. He had the calling to take a populace to the promised land of freedom the way Moses had led his people. But unlike Moses, Gandhiji had planned the whole affair like an artist. He thought like a politician, statesman, a strategist and above all as an artist. Not a simple artist but a philosopher artist. I want to underline the word philosopher in it because recently I saw a few young artists who are in the resident circuit calling themselves (or rather qualifying their friends) as ‘philosophers’. Anybody could call themselves or their friends anything. But there is a great folly in them and that is the difference between these artists who are conceptual artists, performance artists and many more and Gandhiji as an artist. The difference is the sense of romanticism and realism that Gandhiji had and these artists lack. Gandhiji never forgot his years in the West, but when in India, Gandhiji only drew lessons from the West but never stencilled them on to the country. He learnt about his people, understood his surroundings and whatever strategies he employed to get his political work done was politically artistic. His conceptualizing was right from here and now; and he was constantly observing what was going on around him.

Many of our young artists fail thoroughly in life and career though they feel the seeming victory in Facebook, mainly because of this; they go abroad for 33 days come back and try to do art like what they have seen there. And in a shrill voice they say that nothing is good here and nothing is happening here and everything is good there and everything is happening there in art. That is the sorriest state one could go and cut a fool of him/herself. Euro-American experience, however you try to equate with the global phenomenon that we experience in India is different and one just cannot replicate such modes and methods. One could study the form and see how far it could be applicable. One could look at the theories and see how they could be modified to suit our situation; but never a replication of it. Look at any big shows that happen these days, including the Fairs and Biennales. They are all coming from a mould which is made out of international consensus. There is a constant replication of the same for the sake of feeling international. That is bound to fail. That’s where Gandhiji becomes important as an artist. He looked around and saw things. With is heightened imagination, sense of purpose, mission, vision and die hard romanticism he conceptualised them and gave them symbolic forms. Young artists in India need to learn a lot from Mahatma Gandhi and his life.