Dhiraj Choudhury (1936-2018) is no more. Count the number of artists who have made their contributions to Indian art and have gone unsung, then Dhiraj Choudhury will be one of them. You say some are lucky in the art scene and some are not. Dhiraj Choudhury cannot be called unlucky for he had had more than seventy solo exhibitions and many more group participations. Monographs and catalogues have been published on him and his works but still when you think of it, he has never reached that top bracket. There had been some concerted efforts from a few galleries in Delhi to get him to the big league especially when the market was booming and the auction circuit was demanding more and more vintage artists. Diraj Choudhury had everything that could have taken him to the auction circuits except for the right kind of art history built around him and his works. Some are unlucky in that sense.

I say, art history is not mere cataloguing or monograph production. Art history has a different dynamics and to take an artist as a reference point, he/she requires something more than works of art and a celebrated life. It looks something for very vital; a different life, a life that has got reflected into whatever art he/she has done. Many do art and a few get into the art history. Then one may ask whether the final destination of an artist is art history or not. Never I would say that art history is the resting point but I would emphasis the fact that in the history of human kind if an artist needs to find even a speck of space, then definitely finding a space in the art history is the only way. Works of art may go into the private rooms, vaults of museums, family estates with unconcerned heirs and in the ignominy of public collections. But it is art history that gets the artist back to the lime light. Once the art history speaks of an artist, then the digging starts. Have you ever thought why major art institutions make art historical tomes to justify the life and works of their artists? If they don’t do that, where would they place them in the long run in the market place? What the colours and forms wouldn’t and couldn’t do, meticulously argued words could do for them. 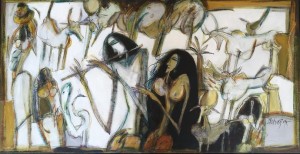 Dhiraj Choudhury was perhaps unlucky in having history to his side. Consider his contemporaries like Rabin Mondal, Ramananda Bandhopadhyay, Shakti Burman, Ganesh Pyne, Paritosh Sen, Sunil Das, Jogen Chowdhury and Bikash Bhattacharjee. Most of them have found a place in the art historical writings in India mainly because of their relentless efforts and experiments. That does not mean that Dhiraj Choudhury was not rigorous enough to push his works and style into the art historical deliberations. If that has not happened, I would say that the reason should be sought in Dhiraj Choudhury’s decision to be a romantic. He was an artist who used expressionism of the times to create a romantic oeuvre. Perhaps, he had that bent of mind and he decided to deal with the life in an ideal village and depict the scenes from the past or from memory even when he was living the major part of his life in Delhi. This must have created a visible disconnect between his personae and his art. This was not prevalent in Indian modern art. Many artists used to fall back to the places in their minds to create their works. But the fluidity of romanticism had the tendency to force the artists to rely too much on what we call art historically ‘Indian painting’ style.

Indian painting style is something that was popularised by the artists who were trained from the Kolkata art institutions who in turn were taught by the artists who were trained both in the Calcutta schools and Santiniketan. This had led to the creation of a kind of art style which took elements as well as inspirations from the traditional mural style, the romantic style of Nandlal Bose and Benode Behari Mukherjee, Bazar painting, Kalighat painting , Indian miniature, popular Ravi Varma school art and the then radical modern art. Artists who practiced this fluid style created works of art that spread across the Indian sub-continent, gaining the name of Indian style painting. In the college curriculum too there was Indian style painting, which meant the non-western academic style. Santiniketan was promoting this ideology though the artists who taught there were well grounded both in the oriental and occidental modernisms. But those who followed the dictum to the T got stuck to a style which sooner than later became the style of magazine illustration and a model for many aspiring artists from the rural areas of India. Today Indian style painting has a very strong market that is patronised by many upper middle class buyers to decorate their homes and as gifts. Dhiraj Choudhury’s was not Indian style per se but his work couldn’t have escaped the traps of Indian style painting too. So it was his fate to be modern yet Indian style; a sort of a heavy bird unable to lift itself high despite having a pair of large wings.

I had a cursory friendship with Dhiraj Choudhury when I joined as a part time art history teacher in the Delhi College of Art, New Delhi in 1995. I taught there for a year and that was the last year of Dhiraj Choudhury’s long stint as a professor in painting. In one of those days the first year painting students were taken to the DumDama lake in Haryana for a picnic in which myself and Dhiraj Choudhury were a part. I remember when the students were having fun near the lake, Dhiraj Choudhury and some other lectures from the college sitting under the cool shade of the resort and drinking. I had joined the party only to listen to the conversations of Dhiraj Choudhury. Older people always have some interesting stories to tell. And I listened to him throughout through the haziness of spirit that I was consuming profusely. I don’t remember a thing that he had said; blame it on the spirit and my age. I was too young to be a teacher and too old to be an obedient listener. But Dhiraj Choudhury came across as a simple human being. I found him extremely sad for some reason thought his stories were making every laugh. Whenever I looked at him thence I could feel the melancholic haze that enveloped him. He passed away like the memory of a melancholic song. Hope one day he would get his due in the art history. May his soul rest in peace.