Five artists’ works which were on display at the show ‘The Past, Present, Future’ held at Jehangir Art Gallery, Mumbai aimed to create a face of Time, using their own sensibilities and relativity. One realises Time is multifaceted as the artists have portrayed..writes Sushma Sabnis 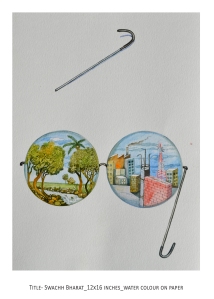 Time is a unit of reference. Time does stand still or not, time could be managed or could be lost. Time could also be spent or saved. Time could be wasted or it could be enjoyed. Time becomes the reference of a life once lived, an active present, and a possible future. Time is an all-permeating ingredient of life. Time is a silent witness to everything. Time also is a healer.

A group show held at Jehangir Art Gallery, Mumbai tried to capture the essence of time through numerous narratives by artists from different schools of thought. Curated by Dr.Snehal Tambulwadikar – Khedekar, the show aptly titled ‘The Past, Present, Future’, had the works of artists Pavan Kavitkar, Amit Thombare, Kunal Namdev, Jenish Vagh, and SS Sunish on display. Time has played the subliminal witness for these works and as one goes through the display, one encounters ‘times’ changed, sometimes blatant, violent, turbulent, humorous, and fantastical. Each work evokes a variety of responses from the viewer.

The works of artist Pavan Kavitkar, a graduate from Sir JJ School of Art, Mumbai and a postgraduate from Santiniketan, portray the stark ironies embedded within a system lashed by rapidly changing political, economical and cultural climes in the name of ‘progress’. Pavan’s painterly works openly address the ironies visible around us today. The ideologies which once fuelled a nation into unity, freedom, and stability, today are being scrutinised and the icons are shown as mere wind-up toy puppets obeying the directives of selfish agents of power. Motifs reminiscent of political leaders, break away and remorph into different objects in another work where Pavan breaks the temple of a spectacles usually affiliated to Gandhi and this broken limb of the glasses, appear like a walking stick, hinting at the limping state of the current economy. This idea is further supported by the lens of the spectacles painted in two contrasting imageries, one of a natural landscape, the other with the grey silhouettes of industrialisation. He calls it ‘Swachh Bharat’ as a satire of today’s times.

Similar narratives leaning towards rural agrarian societies comes into the pictorial planes of artist SS Sunish’s work. Sunish hails from the currently flood ravaged, once green haven, Kerala and he tries to depict nuances of the lifestyles of the people from his surroundings, which he has grown up in. He has a BFA from Govt College of Fine Arts, Thrissur and an ADFA from Santiniketan. The cyclical nature of life and time, seasons and such metaphors arise and place themselves in the works of Sunish. The leitmotif of the shell shows up in every painting on display as if the mobile ‘home’ defines the artist’s main concern, as if saying that the whole farming community that he depicts in his works ought to be deified by their contributions to the world, food grains. Silently he brings in the existential crises faced by daily wage labourers who till the lands and grow gold  while moving from one village to the other for a pittance in return. The shell on the back of these people in some of the works is the fact that they never have a permanent home set up till death. He addresses the past, the present and wistfully the future through these intense biographical works.

The two artists who present their sculptural installations in the show are Jenish Vagh and Kunal Namdev. Jenish and Kunal are both post graduates in Sculpture from MS University Baroda and Sir JJ School of Art, respectively. Visually the motifs of both these artists appear similar at first glance as they both use life like sculptures of human babies to bring out their narratives. Jenish addresses the interfering role of genetic modification in today’s times, as well as the concept of science selling the dream of a ‘perfect’ being, be it a child flawless in health and appearance, perfect in every clinical way. He places two infants on their bellies as if new born facing each other as if looking at their own cloned versions. One seems natural, the other seems unnatural and gruesome. A similar thought is seen in another work by him, where a delicious looking chicken, ready for being cooked is stabbed with an injection of size altering hormones / preservatives. The new age of looking at a ‘modified’ version of a human being also amounts to a kind of annihilation of variety in the world, the creation of a uniform, ‘super’ human kind. These polemic works ring alarming bells reminiscent of the thoughts behind the Third Reich and other world domination plots form the past while also portray human desperation to completely control Nature.

Kunal’s works address a horrendous social issue rampant in our country to this day. That of female infanticide and its causes. At the outset, the artist presents a few stark and disturbing installations where a row of jars holding female infants in preserved state, while just below these jars are broken parts of infants strewn over the floor. The massacre of the innocents is what comes to mind immediately and its political and religious backdrops, be it Christ or Krishna. We have enough examples in mythology and elsewhere where newborns are brutalised to preserve a certain governance. When one looks at the world around us today we see different reasons why innocents have been massacred in the name of religion or more flimsier reasons. Kunal floods the viewer’s minds with all those images one must have encountered even as social media works overtime to convey ‘news’. Aylan Kurdi, Asifa and many more unnamed, become a backdrop of Kunal’s work. In his installation he plunges a wailing infant in a wash basin with water threatening to drown it, as a reminder of numerous deaths of newborn girl children in our own country. Shaking to the core, these works flag out an important issue of genocide of the innocents, which continues unchecked and swiftly brushed under the carpet as ‘casualties of circumstances’. These works make one question themselves about their own humanity.

Amit Thombare, a post graduate in Painting from Sir JJ school of Art,  brings to the viewer an image of a hopeful future as he paints mystical and imaginative portraits of people, with some kind of a meditative element/ situation embedded within it. These works border on romanticism as they evoke an other worldly feeling. Fantastical, positive and serene, the works fiercely reject ambient issues plaguing the society today and urge the viewer to move into a realm which the artist has created out of his own imaginative prowess. The works exude a poetic nature and the intent is to hope for a possibly harmonious future for humanity.

The show ‘Past, Present, Future’ brings out numerous views by artists who open up portals of entry into the past, the present and the future using agencies of their own relativity and interpretations. While there are various methods and intense thoughts involved, including satire which has been explored in the works, there seems to be a slight disconnect in the cohesive nature of the works displayed together. Individually all the artists’ works do stand their ground as far as skill and concepts are concerned but together they appear a trifle disjointed. Some of the works in the show do stand out quite relevantly and vociferously and one hopes to see more of these artists’ works over time.